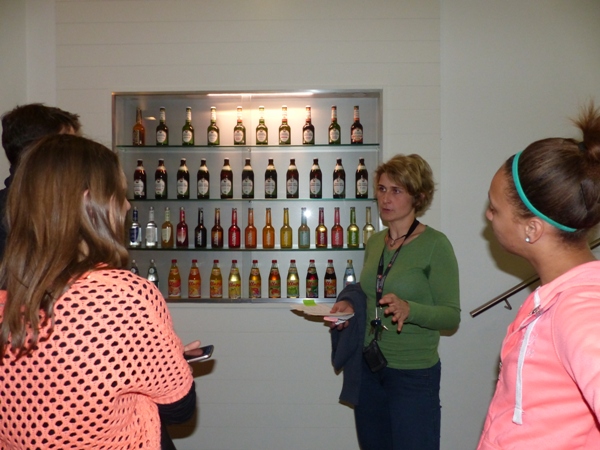 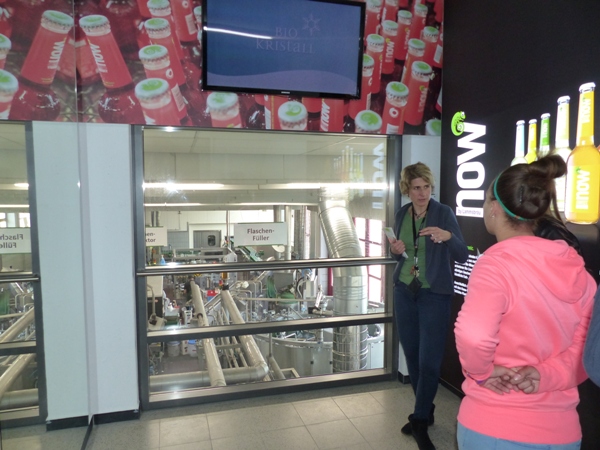 On the 18th of May we met up with Silvia Ohms, who is the Sustainability Manager at Neumarkter Lammsbräu. The owner of Neumarkter Lammsbräu is Dr. Ehrnsperger and he started with biological beer production in the 1970’s and 1980’s. Most of the breweries in the surrounding area went bankrupt and Dr. Ehrnsperger had to find a way to survive and stay ahead of the market. His heart and his motivation had always been on the protection of the environment, so he started with the biological production of beer. In these times, this was not a common occurrence for any company to do biological production of products. Neumarkter Lammsbräu was a pioneer for sustainable production. People laughed at him for trying this new technique and it took a lot of awareness to change the mind sets of both the community and the workers at the company. Nowadays the organic production of products is popular and Lammsbräu are taking full advantage of this trend in the market. They do not only sell organic beer, but also not-alcoholic beer, soft drinks and organic water. It took 9 years, from 1987-1995, for the company to reach 100% biological production. It was hard to convince the farmers to work without fertilizers and other pesticides in their farming practice. The costumers also had to adapt to the increase in price of the beer, because it costs more to organically grow the produceused for the production process. Nonetheless, Dr. Ehrnsperger had a vision and he stuck to it and made a huge success out of it now and for the near future.

The soda and water production is quite new to the company and it started only around 2008-2009. They have also given attention to their transport methods to get the raw material to the company from the surrounding farmers. Their reasoning is that biological products are more sustainable if they are obtained from the region and the material is not obtained from countries far away. The shorter the distance of travelling between producer and company, the lower their carbon footprint. They have really worked hard to get more and more organic farmers from the region. In the past they used to get around 60% of their wheat and 100% hops from the region, now it is almost 100%. This means that almost 100% of the raw material needed to produce the beer comes from a roundabout of 100km radius around the company. However, with the sodas, it is a bit more difficult to become 100% regionalized, because the citrus needed for the sodas cannot be grown in Germany. These fruits are grown in countries with the tropical, subtropical and the Mediterranean climates and they have to be transported from these countries.They are continually looking to find other places where they can get these fruits that will decrease their carbon footprint.

Even with all these good practices, Lammsbräu is taking it one step further. They are now looking into and investigating their supply chain from the producer to when the produce gets delivered at the company for soda production. They want to use countries that are acting sustainably and are treating their workers fairlyso that there are no labor issues. They want to be ecologically sustainable as well as socially sustainable. This research might be published around mid- 2016.

The company is also doing their best to keep their production process efficient enough so their water consumption and water loss is kept to a minimum. They also keep an eye on the energy used and energy saved through the production process, and they publish the results in their annual sustainability report. This report includes what they have done during the year, the targets they have set and the measures they have gone through to reach those targets. The have certificates for both the ISO 14001 and the EMAS (ecological management audit scheme). They are publishing these annual sustainability reports not because they have to but as part of their voluntary duty within the EMAS Certificate. It is voluntary and they were one of the first companies to start this voluntary duty. They want to be as transparent as possible to the people so they continue to do this reporting. This does not only serve as publication of the company’s progress, but also as a marketing tool.

Only 3% of the company’s products get exported outside of Germany, the rest is distributed within Germany. With all their distribution, they want to decrease their carbon emissions. Most of the shops and supermarkets that use the Neumarkter Lammsbräu products have their own transport vehicles to get the products from the company, so even here the company has a smaller carbon footprint than they had before. They also have around 12 trucks of their own for transportation too, but they only travel within 100km of the company.

In the Jurassic period, Neumarkt was covered by a sea and nowgravel and sandstone protects the well water in the town from contamination. The well water is used for brewing without chemical treatment. Due to the quality of this water they are able to be the first company to offer organic mineral water in Germany. In addition they are below the output limit allowed by law. They also bottle their water in recyclable bottles. This water is also used for their ecological soft drinks. They try to cause as little environmental pollution as possible.How can water be organic you’re asking? There are some criteria for water to be organic. They have a quality community, and they have written a catalogue with the criteria. They must measure more pesticide parameters than the normal law required by the government. They also test for medical contamination, like antibiotics and chemicals from medicine, because this gets flushed down the toilet and can end up in the water system. They can only harvest a certain amount of water from the natural system below what the system can regenerate so this is renewable. They do however remove Iron from the water with a sand filter to improve the taste but they do not use chemical treatments.

They also do educational work to tell the public the difference between organic water and what makes it different form normal water. With this they inform the public as to why they pay more for these products than they do for conventional ones. They work together with an institute that goes to schools and talks to learners and perform experiments about the importance of water.

Lammsbräu produce a small amount of each drink every day, because they have only one filling station and have to change the crown cap of the machine each time they produce a different product. This means they have to change it about 2-3 times a day. They produce about 500 hectare liter of drinks per day. Even if they get a new filling station that has been planned, they will remove the old one and use only one because having one machine is more efficient for them.

The company also has a recycling system and they re-use the bottles and crates after cleaning them. They annually compare the cleaning agents they have currently with those on the market. This is to see which one is more efficient and which one is more environmentally friendly and degradable. They only use labels that contain ink with only trace amounts or zero heavy metals in them. They also only use eco-friendly crown and screw caps.

One of the social projects that they run is the employment of community members who are not able to work under normal circumstances due to psychological problems. They get offered simple jobs like sorting the bottles before it goes into the machine that cleans the bottles.

The company likes to think of their 117 employees as a big family. Mrs. Ohms said that she always wanted to represent a company that stands behind their core values and beliefs. A company that is totally transparent and open to the public about their processes and one that is environmentally conscious in everything they do. Now she has found that company in Neumarkter Lammsbräu. She thinks that the only way to live sustainably is to use the resources we need, but not at a rate that the earth is unable to regenerate quickly enough.

We would like to say a big thank you to Mrs. Ohms for offering up the time to show us around the company and good luck to the company with all the future projects.