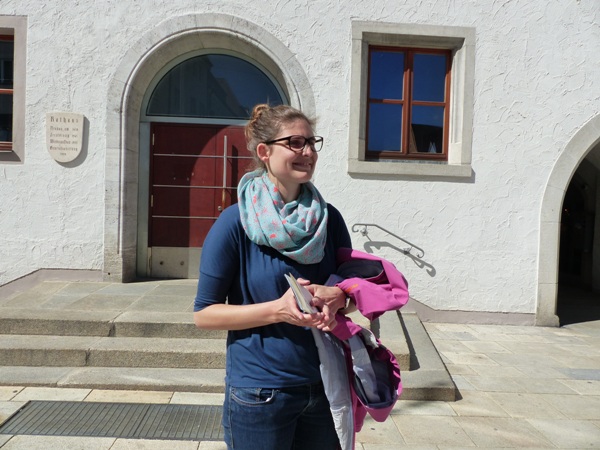 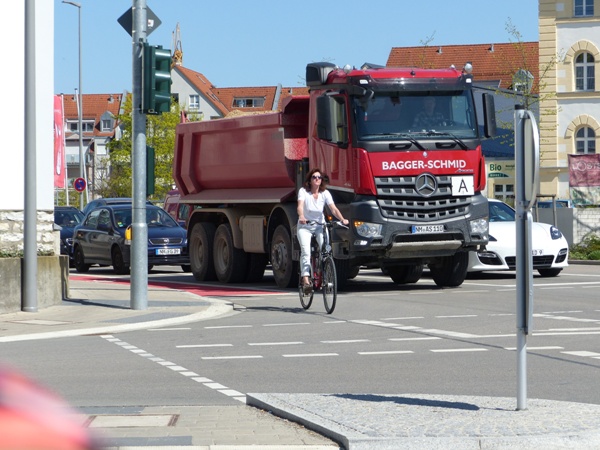 We met with Katharina Duchardt from the https://www.neumarkt.de/de/rathaus/aemter-und-dienstleistungen/aemter-und-sachgebiete/aemterdetails/details/14.html" target="_blank" rel="nofollow">Department of City Planning and she is also in charge of bicycle planning. Katharina showed us the landuse plan for Neumarkt which was updated in 2006. In this plan the real land use and the planned land use, the development the city really wants, is combined together and integrated with the natural landscape plan. This is where the town visually indicates where housing and industry should be expanded if required in the future. The plan also indicates which regions must be free of buildings because of the fresh air coming into the town, and also in important water catchment areas and these free areas act as corridors for nature and the town wants to protect this from development.

Katharina then showed us the newest and biggest project for the bicycle lanes in Neumarkt which is at an intersection across from the Neuer Markt shopping mall. It was the first bicycle lane built on a major road intersection after the old intersection was rebuilt. In Neumarkt there are normally only very narrow bicycle tracks and they are not really nice to cycle on. Now since 2010 there is a new guideline in Germany that aims to bring all the bicycle tracks to bicycle lanes on the streets. They want the motorists to see the cyclists more and this is why the plan is to put them both on the streets. A positive effect of this is that the pedestrians have more space and the cyclists on the street can see the cars more easily.

They also predict that many more people will start using https://en.wikipedia.org/wiki/Electric_bicycle" target="_blank" rel="nofollow">e-bikes in the future so it’s very good for the motorists to start getting used to the cyclists on the street. Biker safety is a really big issue because the city has new rules and many people were afraid of this. For example at this intersection, if the cyclists want to go straight over they stay in the cycle lane. This is right in the middle of traffic. It is marked red and the cars turning right have to cross the bicycle lane and people are very afraid of this. Despite this, the statistics show that this is safer than the traditional intersection with the cyclists on the sidewalks. These new lanes cause less cycling accidents. With these new lanes the cyclists are more visible for the motorsists. One benefit for the cyclists is that they still get right of passage. The cyclists also have their own traffic lights at the intersection. This goes green before the car traffic lights so that they have more time to go over the intersection and they are safe.

Before, all this space was for cars only so now with the bicycle lanes, often the cars get less space than before because it is very difficult to increase the space of the street. For every street we have to think about the best solution for each situation and sometimes the possibilities are very limited. Many people tell their children to use the pedestrian lanes because they are afraid of the intersection so many people are still using bicycles on the pedestrian lane. Hopefully this will change with time. According to the law, you may use the pedestrian lane with a bicycle until 10 years of age and the older people who do this can get a fine.

At the intersection there are special ridges in the concrete for the blind people so they can feel when they are at the intersection. The wheel chairs don’t like this but it is a necessity. For all new streets that are built or upgraded, they must have this but it’s a slow process to convert all existing streets.

The city has a map of all the existing bicycle lanes and has a desired bicycle plan for 2025. The city wants to make Neumarkt more bicycle friendly. For this they hired a company to conduct a survey and then we could see where the different types of bicycle lanes are most needed.

They made a pamphlet for the public when the intersection opened so the public can understand the new rules. In bigger towns this is the standard but for Neumarkt they had to do some awareness. Since thebicycleprogramme they have not seen too many more cyclists on the road. It is still a slow process. Many pupils in Neumarkt are using bicycles to go to school,but most people are going by car to work. This is because most of the city is still planned for cars and almost everyone can afford to use a car. The city wants people to cycle more than driving their car.

The other problem with urban transport planning is that the city has public transport, like busses, but people are not really using it. It is mostly used by pupils during the week to get to school. On weekends there are no more busses from 14:00 and nothing on Sunday’s. They also did something for the busses. When they built the shopping centre, all the streets were rebuilt so they took the opportunity to rearrange the bus stop. This is another aspect of urban transport planning. The busses also have an advantage at the traffic lights. When they are approaching, there is a sensor at the lights and the light will change to green.

Neumarkt wants to become a bicycle friendly city and there is a group of cities who are taking part. If you want to join then you have to fulfil some criteria. Neumarkt is already part of this because Neumarkt helped to found this association. However, they always have to improve to stay in the programme so right now Katharina is trying to make sure Neumarkt fulfils all the criteria.

Thanks to Katharina to give us an insight to the planning of Neumarkt above all the bicycle structure.