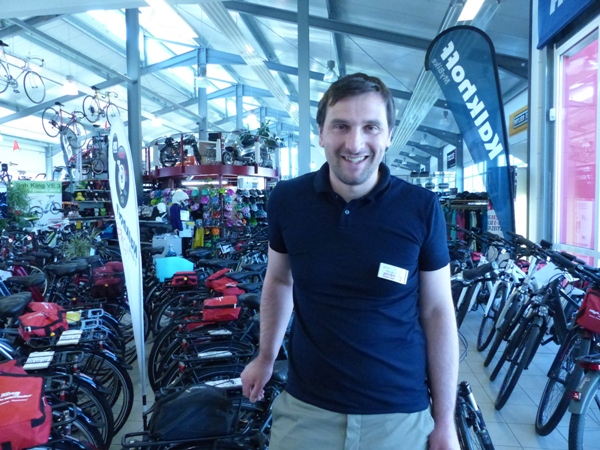 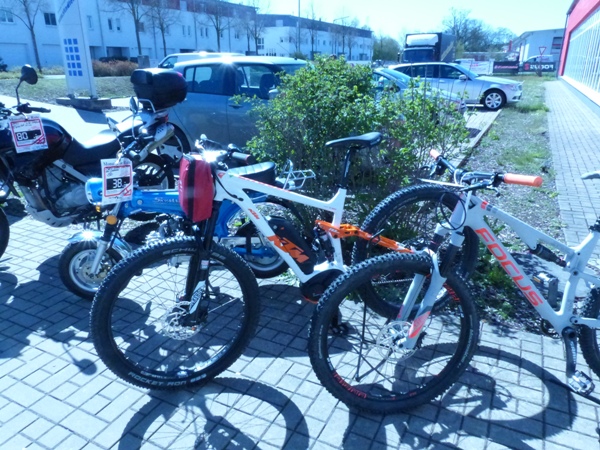 https://shop.zweirad-stadler.de/" target="_blank" rel="nofollow">Zweirad Stadler is one of the largest shops for e-bike sales in Neumarkt. We chatted with Mr. Marcus Triller, the sales manager of the bicycle department and he showed us around in the https://en.wikipedia.org/wiki/Electric_bicycle" target="_blank" rel="nofollow">e-bike section of the shop. E-bikes have actually been around for about 20 years butthe "boom" in popularity only occurred in 2009/2010. Since then, the market has growing steadily.

Mr. Triller told us that he was at a workshop 7 years ago and the lead facilitator told them that about 40% of the sales area in the shop would be reserved for e-bikes in the future. At that time people thought he was irrational, but when you look at Stadler today, e-bikes now occupy more that 40% of the shop floor.

The initial target group for e-bikes were the sixty and over age group. Now, more and more younger people are taking advantage of the opportunity to buy e-bikes. The product that especially attracts the younger generation are the mountain bikes that equipped with electric motors. E-bikes also attracts parents who are pulling their babies along on trailer trips with their bikes. It makes this so much easier with a more powerful bike.

In recent years, e-bikes have received a bad reputation from traditional cyclers due to mistaken beliefs. They started labelling e-bike users as lazy. The truth is that even though the e-bike has an engine, the cyclerpowers the bike and it does not move by itself. In other words, the engine is only there for support.This allows older people to be more mobile withoutexpending as much effort as they would with a conventional bicycle.

Mr. Triller says that some of his clients that come into the store are replacing their second car with an e-bike. E-bikes are, of course, more expensive than a regular bicycle. While a good bicycle costs about 800 EUR, an e-bike with similar features costs around 2000 EUR.

There are e-bikes especially for children and young peoplein the bicycle shop, but these have not been very popular. An e-bike is anexpensive purchase and it is not feasibleto buy one for a young person who will outgrow the bike soon.

Stadler tries to use German manufacturers for their e-bikes and their main target group is the local public. By doing this they can be assured that the workers are treated fairly in the production process and that the products will be of a good quality. Regarding sustainable production, Mr. Triller gave the example that in the spray painting of the bikes, the waste paint is collected and can be re-used.In this way, air pollution is minimized. German manufactures have more stringent rules and guidelines compared with foreign producers with regards to sustainability and environmental protection.

Everybody who buys an e-bike at Stadler gets a letter every year in the spring timewith an offer to service the bike. During the service the important worn parts are replaced. If you have an e-bike without a speedometer, Stadler could (with support) determine the approximate number of kilometers driven based on the number of hours the battery has been in operation.

Recycling of e-bikes and bicycles

If an e-bike or a bicycle is damaged beyond repair, it can end up in the river channel. However, the parts can be taken to Stadler for recycling. The bikes get taken apart and the parts that cannot be used are disposed of in a safe manner. Tyres are processed into tubes and the rest ends up in the scrap. With regards to the battery, there are companies that specialize in recycling them. Batteriesare now built in a way that allows for some of the materials to be easily reused. If bicycles are merely broken but repairable, Stadler has its own bicycle repair shop.

According to Mr. Triller, the development of e-bikes is already wellestablished. The bikes that are now used in the city streets are well advanced. He still sees room for improvement in the development of mountain bikes and sport bikes. The trend for e-bikes has a good chance of growing over the next few years in Austria. This is because their government is supporting their e-bike purchases by subsidizing then with 300 Euro.

There are also some innovations in progressthat will increase improvement over the next few years. These include e-scooters and e-cars. It will become easier for people to replace their second car with an e-bike to travel short distances rather than driving by car. When the newer, better and more efficient e-car models come out on the market, then it is important that there are many role models for the general public who can strengthen the movement towards e-cars. It has already been announced that a new e-car will be coming out in 2017.

Stadler also sells e-scooters. If you want you can take the scooter for a test drive. Since scooters have less space for a battery and also quite heavy, the current range, per "electric charge", is limited to about 60km. For city driving, an e-scooter is very convenient.

If you want to try an e-bike, or you are thinking about buying one, you can contact Mr. Triller. The company also has a solar PV system on the roof of the building. They also try to keep the water and energy consumption to a minimum. There is no air conditioning system in the sales hall. With regards to social sustainability, they repair bikes using the help of refugees.

In another project, Stadler offers professional Förderzentrum apprenticeships and internships for schools.

The city of Neumarkt tries to be a pioneer in e-mobility and is also a frequent user of the e-bike. A Neumarkter city e-bike can be borrowed (within the organization). If you want to borrow an e-bike, find more details here:

This was our visit to the company Stadler: We thank Mr. Triller for his time and a willingness to show us around the shop.