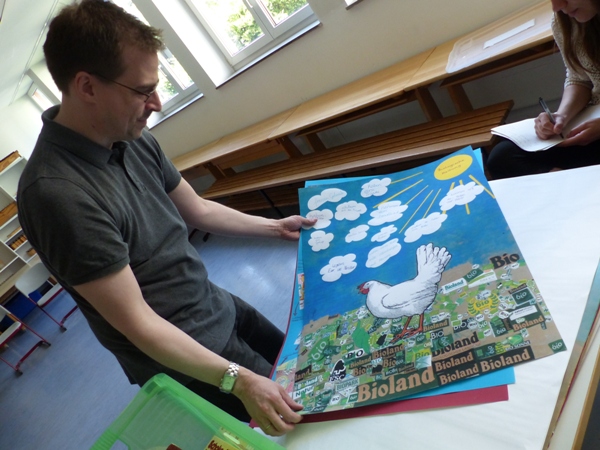 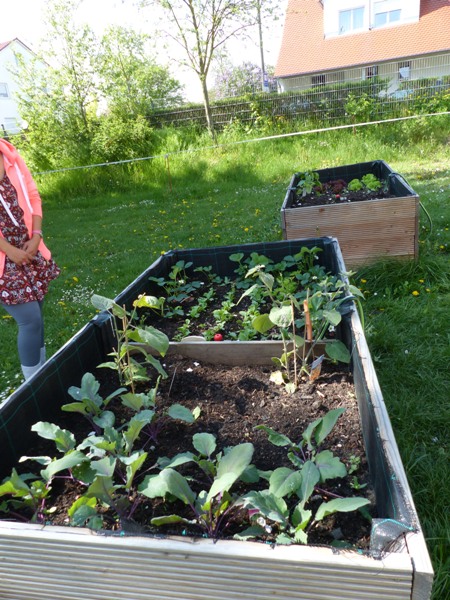 We spoke to the headmaster, Dr. Thomas Mayr from Woffenbach Primary School about how the school is involved in sustainable education for its pupils. At first he mentioned the education for healthy eating programme and how this is linked to awareness for the environment. As part of this programme the school offers the pupilshealthy break snacks (we also were allowed to try) and the ingredients for this are mostly produced in their own school-garden. These snacks are offered every Tuesday for free to the pupils. Because the aim is to teach the pupils about sustainability, the snacks are meat free and milk products are avoided. Instead of these products,only ecological and sustainable ingredients are used to prepare the food. The school also bakes its own bread for the breaks and it’s exciting for the pupils to eat plants they grew themselves and products they baked themselves.

The teaching staff of the school stands behind the topic sustainability and supports the headmaster and because of this, many projects can be realized and are working very well. The aim of the school is not only to reach the pupils, but also their families so thepupils act as multipliers. The parents are now also getting involved and two parents of each class have agreed to do the preparation of the healthy breaksnack. They take turns weekly and alternate with the parents of the other classes. This has been so successful that now there are more parent volunteers than needed and this speaks to the team spirit of the Woffenbacher. For some years the school also offers a day-careuntil 2:00 or 3:30 p.m. The planned catering service for the day-care cancelled on short notice and the localnursing home stepped in and offered to take care of the catering and organised everything spontaneously which speaks again to the sense of community and the team-spirit of Woffenbach. Another interesting project which connects the elderly and the young pupils at Woffenbach is a programme where the school pupils play games and read to the old people in the nursing home. The pupils improve their reading and their attitudes to the elderly and the elderlyenjoy it as well.

After this developed the project expanded to other topics like water, chicken and eggs, milk and agriculture, cotton and child labour. The pupils made posters and info cards on thesetopics, which can be reused and the topics repeated with other pupils. To fit these programmes into the curriculum, normally the teacher will make a special project week but they can also talk about these issues during regular lessons. The way this is done is up to the teacher. A good trend that has emerged is that quite often new projects are being developed out of existing projects resulting in new ideas. The sustainable projects and activities in the school are growing.

Another project was making bat boxes that the pupils made themselves. These should offer bats a roosting opportunity, because their natural habitat is being threatened and at the same time the pupils are being educated about this.

The school has also established a world shop which is run by the pupils where they sell fair trade products during their breaks. Also the separation of the waste is an important topic the pupils are learning and the school takes recycling very seriously. Every class has two months where they are responsible for the “waste-service” at school.

At the school yard there are many things promoting sustainability and environmental awareness. For example there is an oven for baking bread, pizza, sweet things or roasting meat. Baking bread, cooking and food education are important topics the pupils should know about, said Mr. Dr.Mayr. On average every German inhabitant throws away about 80 kg of usable food per year (Source: Bundesministerium für Ernährung und Landwirtschaft o.J.). This is a major problem ofthe German citizens. Compared to other European countries the food is very cheap in Germany but the quality is lower and therefore people don’t have much respect their food and will throw it away but we cannot continue like this when there are so many people in other countries going without food. Early education is crucial to achieve an aware and responsible public, said Dr. Mayr.

At the schoolyard are also existing eight small wooden houses for the insects which were of course built by the pupils. And in the schoolyard there is also two tipis built for the pupils to enjoy. The tipis are made out of branches and vines were planted and the aim is that once grown, the tipis will be covered with a “green wall” but it will take around two years to grow. Directly next to the schoolyard is the schoolgarden.

Rain water is diverted from the pipes and is collected by the school for the garden. The garden is very big and offers a lot of variety including fruits (pear- and quincetrees), vegetables (potatoes, zucchini and sugar pea) and 25-30 different herbs which are planted in a spiral.One pupil is responsible for a specific kind of plant or herb and the he or she must keep a journal and document the life cycle of the plant. The pupils are very interested in these projects and are they even use their break time to care about the plants. The only concern is that some pupils are too motivated and they gave the plants more water than they need.

The teachers try to harvest the food before or after the holidays. During the holidays there are some pupils and two teachers who work in the garden. The headmaster thinks it´s very important that the pupils get used to the taste of self-grown food and to know the taste of all the herbs and vegetables. Because of this, the food grown in the gardenis used to make the healthy breaksnacks.

The school is not able to afford all these projects on their own so it’s very important to get assistance from Neumarkt Stadt and other sponsors. The town supports “microprojects” and at the moment there are eight microprojects being run by the school which represents a quarter of all the projects in Neumarkt. If you have a good concept, the town will support you and in the end the pupils benefit.

The school also teaches the pupils about the topics of climate change and energy. The pupils have had to complete to understand climate change and the correlations between climate and energy. The correlation between the causes and effects are very important. The school also takes part in an action called “small climate protectors are on their way”, with which the pupils can collect climate-miles for reducing their Carbon footprint.

The principle then went through the guidelines of the school and the future sight of the projects. In the school development programme of the school (PDF-LINK), the top priority is individualized education which means that every pupil should learn the most they can on their own. Sustainability has been identified as the second priority to which all these mentioned activities belong.

The concepts of many of these projects came from the ideas of the teachers. From these ideas the principle writes up the concept and then searches for fundingopportunities and sponsors. With a good concept, he can apply for funding at various companies or at the town. With help from outside funders, these projects are being implemented and realized.

The primary school of Woffenbach has achieved the status of an “environment school in Europe” for the third time in row. For the future the school plans to make the garden bigger and to build a “green-classroom” with a pavilion. The goal is for the pupils to be able to learn outside. Dr. Mayr is sure there will be always new ideas,for example a project for bees has already been proposed by a teacher which will involve planting special flowers. In this way the school can continually develop its sustainable education programme to good values in the young generation. Looking at the future projects there is much hope for a sustainable and environment friendly future.